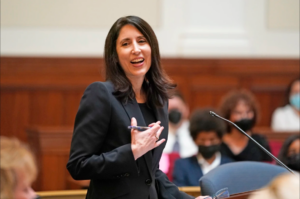 A San Diego appeals court judge who is the daughter of Mexican immigrants was confirmed Tuesday as the first Latina to serve on the California Supreme Court.

Justice Patricia Guerrero was approved by a 3-0 vote of the Commission on Judicial Appointments to fill the vacancy left by Associate Justice Mariano-Florentino Cuéllar, who stepped down last year.

Guerrero, 50, grew up in the agricultural Imperial Valley and has worked as prosecutor, law firm partner and Superior Court judge and is on the state’s 4th District Court of Appeal. She will be sworn in Monday by Gov. Gavin Newsom, who nominated her.

Guerrero, who was praised by colleagues and members of the panel that included Attorney General Rob Bonta and Supreme Court Chief Justice Tani Cantil-Sakauye, said she was humbled by the historic significance of her elevation to the court.

She said she stood on the shoulders of her grandparents and parents who immigrated from Mexico to give their children a better life.

“As I’ve tried to express, this is not just about me, or really even just about my parents, but it’s about so many others just like us,” Guerrero said. “This is a story of the American dream, the belief that with hard work, perseverance and opportunities, anything is possible. And for that I am thankful.”