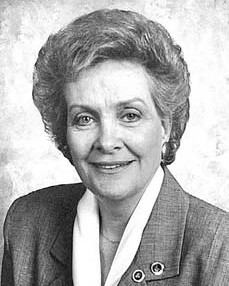 The Honorable Joyce C. Hearn was born in Cedartown, Georgia, to J.C. and Carolyn Carter Camp. She met her husband after enrolling in West Georgia College at age 16. She then transferred to the University of Georgia and graduated with a bachelors in education from Ohio State University. After graduation, they moved to Columbia, South Carolina, where she taught at Eau Claire High School.

Her service to the people of South Carolina was a lifelong endeavor. She began by working with the 1970 Census, eventually becoming both North and South Carolina’s director of the U.S. Census. She was a party volunteer in Richland County and by 1972, she was chair of the Richland County Republican Party. She went on to represent Richland County in the South Carolina House of Representatives as a member of the Republican Party from 1975 to 1990, where she introduced or sponsored legislation focusing on the rights of crime victims, reforming workers compensation, and the rights of the disabled. For years, Representative Hearn was the only woman in the S.C. Legislature, but she was always a force that could not be overlooked, named assistant minority leader from 1976 to 1978 and again from 1987 to 1989.

In 1990, Gov. Carroll Campbell appointed Representative Hearn to be chairman of the Alcoholic Beverage Control Commission. Afterwards, at a time when many of her colleagues were retiring, she began a second career in public relations with her own company Hearn & Associates, until her final retirement in 2014. She was a founder of the National Order of Women Legislators and was active in the Boards of the Columbia Urban League, the board of the Columbia Museum, the Federation of the Blind, Columbia College, and many others. In 1979, she was awarded the Order of the Palmetto by Governor Edwards, in addition to being named Legislator of the Year by many associations over her career.