Jo Ann Jenkins, Karen Lynch And The Women Over 50 Who Are Breaking Up The C-Suite Boys Club 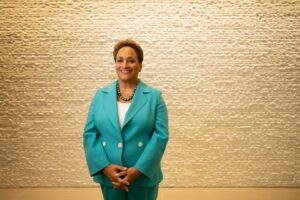 Shortly after Jo Ann Jenkins became the CEO of AARP in 2014, an organization dedicated to helping Americans over the age of 50, she came out with some radical-sounding advice: don’t retire.

“I’m 57 and having the best time,” Jenkins said in 2015. “I’ve had some wonderful work experiences during the course of my 30-plus years here in Washington, but I have to say that today I am finding more fulfillment in the work that I’m doing than I have in any other position I’ve held.”

Fortunately for c-suites across the country, women are taking this advice, and 2020 saw more female CEOs of America’s largest companies than ever before. Many of these women also happen to be over the age of 50, and in breaking up corporate boys clubs are helping to shatter age and gender norms. Forbes and “Know Your Value” are highlighting these barrier-breakers in a new weekly segment on Morning Joe, and this week’s spotlight goes to women over 50 who are breaking the corporate glass ceiling. They are:

Rosalind “Roz” Brewer, 58: Already the 48th most powerful woman in the world according to Forbes, Starbucks chief operating officer Brewer is set to become even more powerful: in January she was named as Walgreens Boots Alliance’s next CEO. When she takes the helm of the company in March, she will be not just Walgreens’ first female CEO, but the only Black female chief executive of a S&P 500 company.

While Brewer has been open about the racial dynamics in corporate boardrooms (“When you’re a Black woman, you get mistaken a lot. You get mistaken as someone who could actually not have that top job,” she said in a 2018 graduation speech at Spelman College), she’s also talked about being surprised at how much attention she has received for the barriers she’s broken.

“I would have hoped that by now it’s boring,” Brewer said in 2019. “It signals to me every time that my work, our work, is never done.”

Jane Fraser, 53: The Scotland-born banking executive will make history when she becomes the CEO of Citigroup next month: Fraser is currently the firm’s president, and when she takes over for current chief executive Michael Corbat she will be the first woman to run one of Wall Street’s four biggest banks.

Fraser began her career in Goldman Sachs’ London mergers and acquisitions office and joined consultancy McKinsey in 1994. She spent half of her ten-year tenure there working part time because her children were still young. “The advice to everyone is, you can have it all, but don’t expect to have it at exactly the same time,” Fraser said during a December fintech conference.

Karen Lynch, 58: Lynch became the chief executive of CVS, one of the world’s largest healthcare companies, on February 1. She was most recently the company’s executive vice president and president of Aetna, and she previously held executive positions at Cigna and Magellan Health Services.

Lynch has described her call to the healthcare industry as one spurred by painful personal experiences: she lost her mother to suicide when she was 12, and her aunt—already a single mother with a son of her own—stepped in to raise Lynch and her three siblings. That aunt died of emphysema, lung and breast cancer when Lynch was in her 20’s, and the moment proved to be an inflection point for Lynch.

“Ironically, I was motivated most by a sense of frustration and helplessness. I didn’t know what to ask the doctors, what to do when she was in physical pain or how to effectively navigate a confusing and complicated system of care,” Lynch told Forbes in 2018. “I wanted to prevent others from feeling the same, and the determination I felt to improve a broken system still drives me today.”

Carol Tomé, 64: The 11th-most powerful woman in the world according to Forbes, Tomé is the chief executive of UPS. It’s a role she hadn’t been planning for: a longtime Home Depot executive who’d worked her way up to CFO, she retired in 2019.

Retirement didn’t last long. When UPS—a company on whose board Tomé has served since 2003—needed a new chief executive in 2020, Tomé was ready to reactivate her corporate life. Wall Street appears to approve of her leadership: UPS stock is up 65% since she took the reins in June.

While she is the first woman to run UPS, Tomé recognizes her responsibility in ensuring that she is not the last. “The first executive officer I named here at UPS was our chief communications officer, Laura Lane,” she said in October. “The first job I created since I joined [went to] a woman.”