It is crunch time for humanity. We need everyone to start leading like a woman 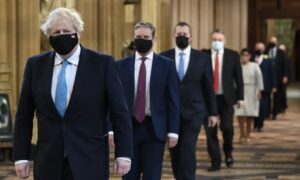 Is Boris Johnson really the best Britain can do? I don’t care what your politics are. Do you honestly think that a guy who rambles on about Peppa Pig, U-turns on important decisions every five seconds and spent years refusing to disclose how many children he has is the most qualified person to lead the UK?

I am not saying Keir Starmer would be much better in the top job, mind you. I am saying there are 67 million people in the UK. Surely, among them, there is someone who would make a far better leader than Johnson?

If we lived in a meritocracy – if opportunity were equally distributed – then we would be doing a lot better than this. But we don’t live in a meritocracy. We live in a world where success isn’t so much about merit but money, a world in which there are established routes to power. In the case of Britain, these take in Eton and Oxford. Johnson is the fifth of the 15 prime ministers since 1945 to have been educated at Eton. Twenty-eight prime ministers went to Oxford (13 of them to Christ Church). Fourteen went to Cambridge (six to Trinity College). Is this because the Eton-Oxbridge pipeline produces the people best suited to lead? Or is it that we just assume they will be good leaders?

We talk a lot about leadership, but we tend to talk around the subject. We don’t often stop to interrogate our ideas about what qualities a leader should embody. We don’t often examine the biases that make us assume someone has what it takes to be in charge. But it is crucial that we do this, because every crisis the world faces is ultimately a crisis of leadership.

Before we can solve anything – from the climate crisis to social inequality – we need to solve the mediocre-man crisis. We need to understand why so many incompetent men are in power. (And before all the men’s rights activists start yelling at me about incompetent women, please take a look around: this point stands because the vast majority of people in charge are still men.)

How do so many incompetent men bluster their way into high office? The short answer is confidence. Lots of studies show that confident people are more convincing – and humans have a lamentable tendency to confuse confidence with competence.

There is, of course, a class element to this. One of the most valuable aspects of an elite education may well be the entitlement it imbues. A series of recent studies by researchers from Stanford University and the University of Virginia found that “individuals with relatively high social class are more overconfident”. Others buy into the hype. The result is that “advantages beget advantages”.

But while class is a catalyst of confidence, so is gender. Research has found that girls as young as six believe brilliance is a male trait. Because the idea that geniuses are predominately male is so ingrained, society tends to reward men for overconfidence and narcissism, while punishing women for the same qualities. Women tend to be reviled if they self-promote “too much” – and so they are inclined to do it far less than men.

As a female writer, I can also tell you that women are punished for pointing out that men aren’t perfect, so let me quickly tell you that a guy has said the same thing. The organisational psychologist Tomas Chamorro-Premuzic wrote a book in 2019 called Why Do So Many Incompetent Men Become Leaders?, arguing that men dominate positions of power because they are more likely to exhibit toxic traits such as self-absorption, which we then mistake for markers of high ability.

“Women are better leaders,” Chamorro-Premuzic told the Financial Times. “I am not neutral on this. I am sexist in favour of women. Women have better people skills, [they are] more altruistic, better able to control their impulses. They outperform men in university at graduate and undergraduate levels.” A 2019 study that analysed the performance assessments of more than 60,000 leaders found that women rate higher than men in 17 out of 19 leadership skills.

I agree with Chamorro-Premuzic on a lot, but I want to make something very clear: I don’t think women are hardwired to be better leaders. I am not interested in having more women in power for the sake of it. Who cares about having more women in charge if those women simply lean into a toxic model of leadership that men have created?

I am interested in advancing a more “feminine” model of leadership, for men and women. Because while I don’t believe that men and women are hardwired differently, we are certainly socialised differently. All the “feminine” traits that women have been told are weaknesses in the workforce (empathy, collaboration, altruism) are, in fact, strengths.

It is high time – and I think the pandemic has dramatically underscored this – that we stop telling women to “lean in” to a male style of leadership. Instead, we should tell everyone to start leading like women. And, if you will excuse the terribly unfeminine self-promotion, I have written a book called Strong Female Lead that argues exactly that – and explains what a “female” model of leadership looks like.

The next decade may be our last opportunity to solve the climate crisis, create more ethical artificial intelligence and determine our future. As Christiana Figueres, the leader of the 2015 Paris accord and one of the women I interviewed for my book, has noted, it is crunch time for humanity. Here is the thing, though: we aren’t going to be able to change anything if we don’t drastically change how we think about leadership.