Inside the Mind of the Most Powerful Woman in Europe 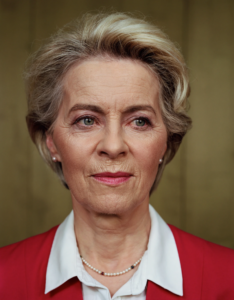 This winter, as the E.U.’s top official worked around the clock in Brussels, she hoped for something unusual: that it would all be for nothing. It had been just over two years since Ursula von der Leyen became President of the European Commission, and with Russian troops massed along Ukraine’s borders, her job was to coordinate with E.U. member states on potential sanctions against Russia. “We were working day and night,” she says “but we hoped we’d never, ever use it.”

By then, the most powerful woman in Europe was used to living at the office. Her position doesn’t come with an official residence, and whenever she isn’t traveling for work or making rare trips home to see her family in Germany, von der Leyen sleeps in a 270-sq.-ft. room right by her desk. That unusual decision proved to be convenient when, 102 days into her term, the World Health Organization declared COVID-19 a pandemic in March 2020. It soon seemed like the E.U. might fall apart, with fierce disagreements over border closures and tense negotiations on an economic rescue package. “It was very much crisis mode,” she recalls.

It was hardly what von der Leyen was expecting when she became the first woman in history—and the first German in more than 50 years—to lead the European Commission. (The Commission functions as the E.U.’s executive branch but is also the sole body capable of proposing new laws.) The President’s day-to-day job is to get the College of Commissioners—the representatives of the 27 E.U. member states, taking in 477 million people—to agree on E.U. policy and budgets, and to propose legislation. When she took office in December 2019, her focus was on digital and green policies, as well as gender equality.

Instead, the agenda has been dominated by war and disease. Just as the pandemic was beginning to recede—Europe’s COVID-19 death toll now surpasses 2 million—the next crisis began, when Russia launched a full-scale invasion of Ukraine on Feb. 24. “It was a nightmare,” she says, “but we were prepared, and then we really could act rapidly.”