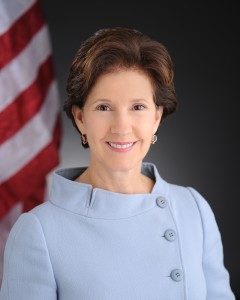 Inez Moore Tenenbaum was sworn in on June 23, 2009 as the ninth Chairman of the U.S. Consumer Product Safety Commission (CPSC). The term expires in October 2013. Tenenbaum served as South Carolina’s State Superintendent of Education from 1998-2007. During her tenure, student achievement in South Carolina improved at the fastest rate in the nation, with scores increasing on every state, national, and international test administered. At the end of Ms. Tenenbaum’s tenure, the prestigious journal Education Week ranked South Carolina number one in the country for the quality of its academic standards, assessment, and accountability systems. Tenenbaum received her Bachelor of Science and Master of Education degrees from the University of Georgia. She received her law degree in 1986 from the University of South Carolina Law School and practiced with the law firm of Sinkler & Boyd, P.A. from 1986–92 in the areas of public interest, health, and environmental law