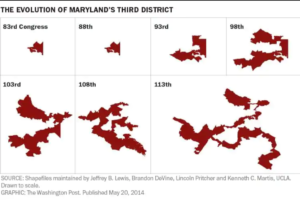 Many states, like South Carolina, enshrine incumbency protection in traditional districting principles. Formally that means not pairing incumbents in a district. That also means you ensure that incumbents live in “their” redrawn district. However, population changes can force drawing incumbents into the same district.

Incumbents have a large electoral advantage. Pairing incumbents from the minority party undermines that party’s overall incumbency advantage by creating open seats. Incumbency protection rules can protect against this tool of partisan gerrymandering.

Incumbency protection can also preserve existing partisan balances. Legislative leaders agree to ensure reelection for everyone possible. Bipartisan gerrymandering packs some districts with minorities—racial, ethnic or political—ensuring reelection of minority party candidates. For incumbents, this reduces challenges in both general and primary elections. It also garners votes from the minority party for the redistricting plan. At the same time, bipartisan gerrymandering limits opportunities to increase the minority group’s representation.

When incumbents are in the room where plans get drawn, incumbency protection moves from partisan strategy to individual self-interest. That can mean drawing potential opponents or problematic constituents out of the district. It can also mean keeping donors or campaign workers in the incumbent’s district. That is truly where legislators choose their voters—or their opponents.