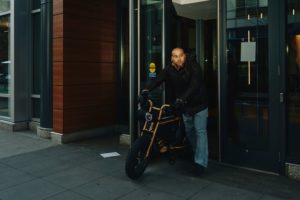 As the pandemic curbs in-person voter registration, a growing number of doctors and nurses are registering their patients to vote.

BOSTON — The sign is easy to miss in the waiting room of the emergency department at Massachusetts General Hospital, next to the reception desk and a hand sanitizer pump. “Register to vote here,” it says, above an iPad attached to a lectern.

The kiosk has stood there since November, before the pandemic began and stayed there through the worst weeks of April, when 12 gasping patients were put on ventilators during a single grueling 12-hour shift.

Now, as the number of coronavirus patients has slowed to a trickle, Dr. Alister Martin, the 31-year-old emergency room doctor who built the kiosk, is determined to keep trying to register voters.

“There will be a time where, above the din of suffering we ask, ‘How can we use this to make something better of our situation?’” vowed Dr. Martin, who always sports a “Ready to Vote?” badge around his neck.

Dr. Martin’s project, VotER, has taken on new urgency as the pandemic has curbed traditional in-person voter-registration efforts, and as the link between public policy failures and death has become especially clear.

Now, despite a pandemic — or perhaps because of it — his project is spreading across the country. Since May, more than 3,000 health care providers have requested kits to register their own patients to vote, including at flagship hospitals across the country in Pennsylvania, Kansas and Arizona.

VotER is part of a larger movement that pushes medical professionals to address the underlying social conditions — such as hunger, drug addiction and homelessness — that make their patients sick in the first place. At its core, it amounts to nothing less than an effort to change the culture of medicine by getting doctors and nurses to view the “civic health” of their patients as part of their professional duties.

Supporters of this movement say the health care system tends to work best for communities that vote, so encouraging voting is a strategy for improving patient health in the long term. Jonathan Kusner, a fourth-year medical student who is co-chair of Med Out the Vote, a get-out-the-vote initiative started by the American Medical Student Association, said his group was encouraging primary care doctors to include “Are you registered to vote?” on intake screening questionnaires, similar to questions about domestic violence.

“Just as we ask people to behaviorally modify their diet or their exercise or their health, we could ask people to modify their civics,” said Mr. Kusner, whose organization has teamed up with VotER to promote voter registration in hospitals around the country.

But some health care professionals frown on voter registration efforts, fearing that they could be viewed as partisan. After years of being dependably Republican, doctors are now more likely to be Democrats.

Others worry that registering voters is beyond the scope of what medical professionals should be asking their patients. Few doctors have been trained to discuss voter registration in a nonpartisan way, and many emergency room doctors already feel overwhelmed by their work as it is.

“There is an enormous voice that says, ‘Not our job,’” said Dr. Harrison Alter, the founding executive director of the Andrew Levitt Center for Social Emergency Medicine, which helped popularize a new medical field called “social emergency medicine” that trains doctors to tackle social conditions that make patients sick.

But newly minted doctors tend to be more outspoken about the need to get involved in enfranchising patients, and trying to fix a broken health care system.

“Previously, physicians taking a political stance was seen as possibly unprofessional,” said Dr. Kelly Wong, the founder of Patient Voting, a Rhode Island-based effort to provide hospitalized patients with information that can help them navigate the gantlet of voting from a hospital bed. “Civic engagement of our patients and our communities is really important to changing health outcomes.”