In a League of Her Own, Miami Marlins Make History with First Female General Manager 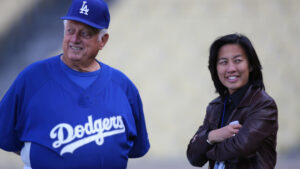 She is not only the first woman general manager of a professional baseball team but also the first Asian-American.

Her office will now in Miami’s Little Havana neighborhood at Marlins Park.

In a previous interview on Sportsnet, Ng admitted she interviewed for general manager jobs before. But she never made it to home plate, until now.

The reporter asked, “What will it take for that glass ceiling to finally break?”

Her resume speaks for itself.

“She has been involved with every facet of baseball from the commissioner’s office—she is ready. I’m thrilled that she has gotten this opportunity,” a sports commentator said.

She has worked for more than 30 years in Major League Baseball. She started as an intern and grew to work with the Chicago White Sox, the New York Yankees, Los Angeles Dodgers, and eventually as a senior vice president of baseball operations.

“Kudos to the Marlins but at the same time, she is capable, she is worthy, why wouldn’t you do it?” Flores said.

Former professional tennis player Billie Jean King, who also fought for women to be treated equally in tennis, tweeted her congratulations and wrote, “progress” and hashtag “trailblazer”. She also linked to an article from USAToday.

Former First Lady Michelle Obama tweeted in-part, “I grew up loving the Cubs, but I’ll be cheering you on.”

The new Marlins GM, along with her accomplishments, are being talked about in many news and sports articles along with online magazines.

In a statement, Marlins CEO Derek Jeter said, “On behalf of Principal Owner Bruce Sherman and our entire ownership group, we look forward to Kim bringing a wealth of knowledge and championship-level experience to the Miami Marlins.”

We expect to hear more from Ng on Monday, but in a statement, she said she doesn’t take this lightly. She wants to continue building a winning culture that fans can expect and deserve.

Over the course of her 30-year career, she has been part of guiding teams to eight postseason appearances, six league championship series, and three World Series.

In a statement, Ng said that it is the “honor of my career” to lead the Marlins as the next GM.