In a First, Researchers Discover a Pregnant Egyptian Mummy 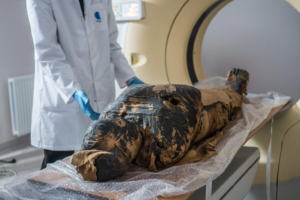 An Egyptian mummy that for decades was thought to be a male priest was recently discovered to have been a pregnant woman, making it the first known case of its kind, scientists said.

Scientists in Poland made the discovery while conducting a comprehensive study, which started in 2015, of more than 40 mummies at the National Museum in Warsaw, said Wojciech Ejsmond, an archaeologist and a director of the Warsaw Mummy Project, which led the research.

The findings were published last month in The Journal of Archaeological Science. “It was absolutely unexpected,” Dr. Ejsmond said.

The anomaly turned out to be the tiny leg of a fetus, estimated to have been about 26 to 30 weeks old at the time, according to the team’s findings. Additional computer scans and X-rays revealed that the woman died when she was 20 to 30 years old.

Based on their noninvasive research, scientists deduced the mummy was made around the first century B.C. The body belonged to a woman of high status wrapped in linen and plain-weave fabrics and accompanied “with a rich set of amulets,” researchers wrote in their findings.

Although burials of pregnant women in ancient Egypt have been found before, this is the first known discovery of a mummified pregnant woman.

“It’s like finding a treasure trove while you are picking up mushrooms in a forest,” Dr. Ejsmond said. “We are overwhelmed with this discovery.”