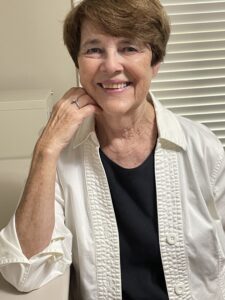 In 1979 I met Julia Child, the iconic “French Chef” of television and cookbook fame.  She and her husband, Paul, came to a reception in Cambridge, Massachusetts, to meet the new class of Nieman Fellows, mid-career journalists who had been selected to study at Harvard for an academic year.  I was lucky enough to be a member of that group.

Julia Child was effervescent and fascinating, towering above most of us (she was 6’2”), her distinctive voice carrying far and wide across the garden where we sipped wine and nibbled hors d’oeuvres.  I saw her a few more times during that wonderful year when I was shopping at a small French market in the neighborhood where we both lived. (I purchased her “Mastering the Art of French Cooking” cookbook in the late 1960s, and over the years have continued to try my hand at her recipes.)

So, I was keen to watch the new TV series “Julia”, which tells how Julia Child, then an unknown but enthusiastic cook, changed the way Americans thought about food and how to cook it. What especially struck me while watching the show was the portrayal of the young Black female producer during the early days of the program, which aired from 1963 to 1973.  (That character was actually a composite of two female producers who worked at WGBH-TV in Boston at the time.)

The producer was emblematic of the status of most women in print and electronic journalism at the time:  Their numbers were few and they weren’t given much respect. Consider that until 1971, the important National Press Club, based in Washington, D.C., was male only.  Women had to sit upstairs in the balcony and weren’t allowed to ask questions.

Women in newsrooms then were routinely paid less than men.  Most were shunted over to the Women’s Pages.  Few were invited to be political reporters or foreign correspondents or executive editors.  Sexual harassment was common, but it was rarely reported.

Displays of emotion by women weren’t tolerated in the newsrooms of yesteryear, either. One journalist friend of mine made sure to shed tears in the bathroom if crying was ever warranted.

Today, things are seemingly better.  Women head up numerous newsrooms across the country, including large newspapers like The Washington Post and USA Today.  Tune in to any major TV network or cable channel and you’ll see women everywhere — as reporters and anchors and pundits and foreign correspondents.  In fact, some of the best war correspondents today are female.

Despite gains over the past several decades, though, men “still dominate in every part of news, entertainment, and digital media,” according to The Status of Women in the Media 2019 report (the most recent available).  Two-thirds of all media credits and bylines belong to men, and pay gaps persist along gender lines, with men earning “substantially more than women.”

Editors of the nation’s 135 most widely distributed newspapers in the U.S. are overwhelmingly male and White. It’s the same story for top executives in radio and TV, and on digital media platforms, too.

It matters, of course, who writes the articles and who reports the news.  Women often have a different view of what’s important to report.

Until the women’s movement came to the fore in the 1970s and more women were hired by newspapers and electronic media, subjects such as birth control, abortion, child care, spousal rape, credit card restrictions, make-up of juries, discriminatory health insurance rates, entrance into Ivy League colleges, and pregnancy discrimination were largely ignored by the mainstream media.

It matters who tells the stories, and how those stories are told. Julia Child understood that.