I Help Oversee All-Mail Elections In A County Of Millions. Trump Is Wrong — It’s Safe. 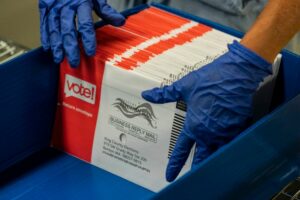 In the upper left corner of the United States resides an inconvenient truth for President Donald Trump and his followers: A highly successful mail-in voting system.

Amid a pandemic that has made in-person interactions dangerous, Trump and his allies have attempted to sow fear and uncertainty around mail-in voting even as he attends in-person rallies and events that we now know may have exposed hundreds to COVID-19. But his dangerous tall tales of fraud and tossed ballots are readily dispelled against the backdrop of Washington state’s entirely by-mail voting system.

Voting by mail is the safest, most secure way to get this election done and to restore trust in a bedrock of our democracy.

I know this because I chair the council for King County, Washington, which has run vote-by-mail elections for over a decade. We are the largest jurisdiction in the United States to conduct all elections by mail. Our nonpartisan regional government represents 2.2 million people who live in Seattle, Bellevue and dozens of other cities and surrounding communities. And we have been voting exclusively by mail here since 2009, and statewide in Washington since 2011.

This means that our elections — for president, Congress, governor, county and city councils, school boards, special districts — are all conducted fully by mail. And I can tell you without any doubt whatsoever that Trump, and those repeating his propaganda, are wrong about voting by mail.

Voting by mail is simple. It works. It’s convenient and secure. It has bipartisan support. In fact, Washington state Republicans overwhelmingly support the system, including our Republican Secretary of State, who herself was elected by mail-in ballots, in our increasingly blue-trending state. Even after being inundated with months of the president’s outright lies, a new poll released last week by the respected western states research, public affairs and communications firm Strategies 360 found that a majority of conservatives in our state still support it.

A well-designed vote-by-mail system is at least as secure ― and far more inclusive ― than voting in person. In Washington, we take a multitude of steps to ensure that neither ballots, nor ballot drop boxes, are tampered with. Ballots are tracked and verified. Votes are not dumped or double-counted. Only ballots from confirmed registered voters are counted. Our system has been reviewed and found to be very accurate. In the 2018 election, Washington state found just 142 cases of improper voting out of 3.1 million ballots cast, an error rate of 0.00004581.

In King County, the effect of our robust vote-by-mail system means voter turnout in record numbers. We saw 82% voter turnout in the 2016 general election, and 76% in 2018. Compare that with the national turnout of 61.4% in 2016 and 53.4% in 2018, according to U.S. Census Bureau records. Indeed, an August study published in Science Advances found that mail-in voting increases voter participation, often significantly. We are so confident that our system is accessible to everyone that our county’s nonpartisan elections director has credibly set an audacious voter turnout goal of 90% in this year’s general election.

Voting by mail also reduces the opportunity for voter suppression through intimidation or other factors and it offers a physically distant way to vote as the COVID-19 pandemic wears on. Voters cast their ballot from the privacy of their home and then mail their ballots (no postage necessary in Washington state) or drop them in a ballot box without interacting with anyone.

President Trump seems to fear this ease of voting. During the first presidential debate last week, he told his followers to go out to the polls and “watch very carefully,” a suggestion that could amount to illegal voter intimidation. Earlier this month, Trump supporters blocked voters from entering a polling place in Virginia. But with mail-in ballots, neither he nor his henchmen can stand in the way.

So, what can we do? First, make a plan for how and when you’ll vote. Check your registration, be sure your ballot will be mailed to your current address or update it if you need to. If you are traveling away from home, request a ballot be sent to you if your state or county allows it. Talk to your friends and family about voting and how you can be sure your voice is heard. Vote early if you can. Once you cast your vote, track your ballot. You can track your ballot in all 50 states and the District of Columbia.

This pandemic-year election will chart the course for the future of our country. Voters must be given every opportunity to take part in it. Vote-by-mail is the best way to give all voters every opportunity to take part in it. We must ignore the fearmongering and attempts to suppress our vote and instead embrace this safe and easy method that allows everyone to have a say in our selecting our government leaders.