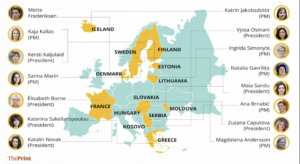 As the Russia-Ukraine war enters its fourth month, and Europe faces its ‘darkest hour’ since World War 2, people in the region are turning to their political leaders to make sense of the shifting geopolitical landscape. A look at the leadership in the region reveals that women are either the head of state or head of government in 13 out of 45 European countries—the highest ever.

This was evident in the photographs from the second India-Nordic summit held in Copenhagen earlier in May. Prime Minister Narendra Modi and Norwegian PM Jonas Gahr Støre were the only men in a group of six heads of state. The four prime ministers from Denmark, Finland, Iceland, and Sweden are all women.

The growing presence of female leaders in Europe may not come as a surprise given the legacies of the late Margaret Thatcher who was prime minister of the United Kingdom for 11 years and more recently Germany’s Angela Merkel, who stepped down as Chancellor last year after 16 years.