How to Reconnect Rural and Urban America 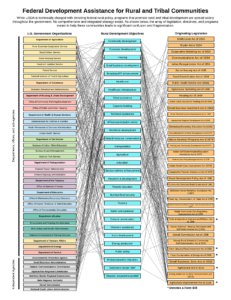 As it was in 2016, so it is again in 2020: A central axis of national-election results is the rural-urban gulf. Larger cities—really, conurbations of any sort—mainly went for Joe Biden. Donald Trump’s major strength was in the smallest cities and in rural areas.

Obviously there has been more to Donald Trump’s power than purely regional dynamics. (In particular, there are racial dynamics, as laid out here and here and here.) And as Deb Fallows and I have argued for years, the United States looks more hopelessly divided when it comes to national elections than it does from any other perspective. For instance, see these dispatches from western Kansas, back in 2016.

But also obviously, national elections matter, and regional and locational polarization makes every other challenge for America more difficult. In a new paper for Brookings, John Austin argues that Midwestern voting patterns for Trump and Biden show how the sense of being “left behind” fuels resentment-driven politics—and how a sense of possibility can have the opposite effect. August Benzow of The Economic Innovation Group has a related paper on the stark differences within rural America on racial diversity, economic positioning, and political outlook.

Does anyone have an idea of how to blunt these differences and open more opportunities? Especially as a new administration faces all the economic, public health, law-enforcement, and other crises the new Biden team is about to take on? Here are some recent items worth noticing:

1) A Marshall Plan for Middle America: During election years, reporters troop into cities (and especially diners) in Ohio, Pennsylvania, and other parts of “interior America” to get political quotes. Then, typically, the press spotlight moves someplace else.

This past weekend in The Washington Post, the mayors of eight of these middle-American cities wrote about what could be done to move their areas ahead. These are places we know and have written about, many of whose mayors we also know personally. The cities are Pittsburgh, Pennsylvania; Cincinnati, Columbus, Dayton, and Youngstown in Ohio; Louisville, Kentucky; and Huntington and Morgantown, West Virginia. All are in the Appalachian or Ohio River Valley regions, often stereotyped in national discourse as the land of coal mines and decrepit factories.

The mayors argue that it is time to draw on the region’s manufacturing heritage, and recreate its economy in a fundamental way. For instance:

According to our research, taking advantage of our community assets, geographic positioning and the strengths of our regional markets can help create over 400,000 jobs across the region by investing in renewable energy and energy efficiency upgrades to buildings, energy infrastructure and transportation assets.

Renewable sources of power are proving less expensive, and fossil fuel companies are increasingly dependent on federal subsidies to survive. Couldn’t these subsidies be strategically shifted to invest in a green economy that keeps these largely suburban and rural jobs but transitions them, with federal support, into new industries that will grow in the 21st century?

Like our friends at Reimagine Appalachia—a grass-roots community and environmental organization—we believe a Marshall Plan-scale reinvestment is necessary. Rather than a “Green New Deal,” our plan would seed long-term regional investments in Appalachia’s rural and suburban communities, while leveraging the technological successes of our tentpole cities to assist them. The same goes for our neighbors in the Ohio River Valley throughout the Rust Belt and up to the Great Lakes region.

I agree with their pitch, and hope their prospectus gets attention. Here is a complementary argument from Bill Peduto, the mayor of Pittsburgh, and another from Annie Regan, in the Pittsburgh Post-Gazette.

2) Reducing Polarization by Modernizing Rural Policy: The political and cultural ramifications of a rural-urban divide are hot topics journalistically. “Rural policy,” not so much. But in a new report for Brookings (available here), Anthony Pipa and Nathalie Geismar argue that straightening out the rat’s-nest of programs intended to help rural America could make a big difference.