How Did We Get so Gerrymandered? 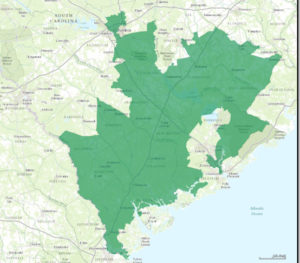 Richland County’s Ward 10 is a very Democratic precinct in the middle of SC Congressional District 2, which has been Republican since Floyd Spence switched parties in 1962 and the district followed his lead. Now most of Ward 10 is in SC Congressional District 6, part of which is a narrow corridor that conveniently removes Democratic votes from the safely-Republican district and makes the Democratic district even safer. The voters in Ward 10 feel that their votes won’t make a difference in any congressional race. Districts in SC are rarely competitive.

In South Carolina, Democrats won 43% of votes in the 2018 Congressional races but only 29% of the seats, sending only two Representatives to Washington. Fairly-drawn districts would give Democrats 43%, or three seats.  In other states, the imbalance hurts Republicans in much the same way.

Why do we have problems like this all over the nation?

The basis for determining congressional districts comes early in the Constitution (Article 1, section 3). That section specifies not more than one US congressional representative for each 30,000 in a state, and also establishes a census to count the population every ten years. In 2019, we’re still arguing about the census, highlighting the importance and lasting impact of this process.

Of course, the devil is in the details.  At both the state and federal level, the details are left to the states by Article 1, Section 4 of the Constitution. In South Carolina, districts are drawn by the party in power in the State Legislature. The Judiciary Committee of the SC House establishes the Election Laws subcommittee to draw districts.   In 2011, the chair and two members were Republican and two members were Democrats, so the deciding vote on these lines went to the majority.

Once the sub-committee draws up and agrees on the districts, the new districts go through the same process as any statute: approval by the full committee, then by the House, then by the Senate, and finally by the Governor. It’s too easy for the party controlling both Houses and the Executive branch to use available technology to draw districts that are “packed” (with many voters of one party crowded into one district) and “cracked” (with so few voters of one party in each of the other districts that there’s never enough to win an election).

When one party is in power at every step of the process, it creates the unequal distribution of seats we see today.  To provide fair districts for all parties, there must be a change in the way districts are drawn, and that means a change in who draws and approves them.