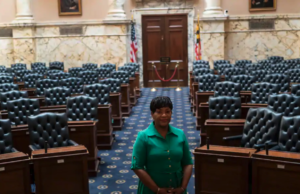 But after 10 months of work on the issue and nationwide protests, House Speaker Adrienne A. Jones (D-Baltimore County) wasn’t having it.

She told Senate President Bill Ferguson (D-Baltimore City) that she wanted the policing overhaul finished, too, but she wanted it done right. With a mural of Harriett Tubman on the wall to her left, Jones — the first Black person and first woman to hold her leadership position in Maryland — rose from her wingback chair and told Ferguson to leave her office.

The showdown this month set in motion last-minute changes to legislation that put Maryland at the forefront of the national debate on policing. Among other things, lawmakers gave civilians a greater role in deciding police disciplinary cases, propelling sweeping change in a state long known for its strong officer protections.

Maryland, the first state to enact a Law Enforcement Officers Bill of Rights, on April 10 became the first state to get rid of the decades-old statute, which allowed officers to wait five days before cooperating with internal misconduct inquiries, scrubbed records of complaints after a certain period and ensured that only officers — not civilians — handled complaints about police.

Lawmakers also enacted legislation to mandate body cameras, limit the use of no-knock warrants, impose a statewide use-of-force standard that includes a criminal penalty of up to 10 years in prison for excessive force, and allow certain police complaints to be made public.