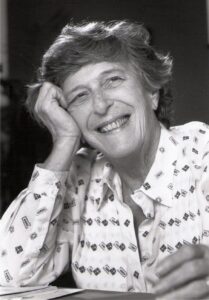 This Democrat and self-proclaimed “New York Jewish liberal,” represented Beaufort County in the SC House of Representatives from 1977 until her retirement in 1993. She was a tireless advocate of the arts, education, and the protection of the environment from nuclear waste and other energy hazards. She was always active in civic and cultural affairs, but only ran for office at the urging of her family after her children were largely grown and out of the home. In 1974, at age 52, she became the first woman elected to the Beaufort County Council. After achieving some success on Council, she waged a successful bid for the House, where she was associated with progressive legislators nicknamed the “Crazy Caucus,” which also included Jean Toal. She felt her active membership in the National Conference of State Legislatures provided the opportunity to contribute nationally to public life. Of her sixteen years of House service, Mrs. Keyserling wrote in her remarkable autobiography, Against the Tide: One Woman’s Political Struggle, “what was most important to me as a legislator were the issues, the friendships, the victorious battles, the feeling that I had contributed towards the improvement of some people’s day-to-day lives.”