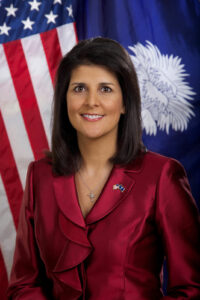 Nikki Haley was born in Bamberg South Carolina and received a bachelor’s degree from Clemson University. In 1998, Haley joined the board of directors for Orangeburg’s Chamber of Commerce and Lexington’s in 2003. Haley became president of the National Association of Women Business Owners in 2004 working with various organizations. Afterward, she went on to be elected for the South Carolina House of Representatives in 2004 and serving for three terms. She became the first woman and ethnic minority elected governor of South Carolina in 2010 and was reelected in 2014. In 2016 President Trump selected her to be the U.S. Ambassador to the United Nations. In 2017 she became the first Indian American in a presidential cabinet.