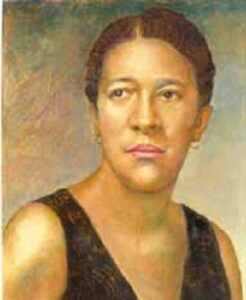 Modjeska Monteith Simkins, known as the matriarch of the Civil Rights Movement, graduated from Benedict College in 1921 then began teaching at Booker T. Washington High School. Starting in 1931 she worked as Director of Negro Work for South Carolina’s Tuberculosis Association as the state’s only African American public health worker at the time. She was a founder of the state conference for the South Carolina NAACP. Simpkins was the first woman to serve as officer as Secretary of the state conference in 1941 until 1957. In 1950 Simkins helped the fight for equalization within Clarendon County Schools by working on the declaration of the school lawsuit. After some reworking, this case went on to become one of the cases in Brown v. Board of Education that fought the “separate but equal” belief.