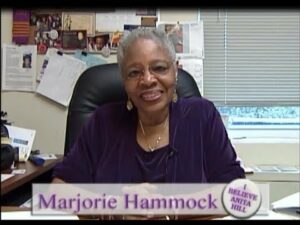 Marjorie Hammock was born in Atlanta Georgia and moved to Connecticut with her parents as part of the Great Migration. She studied social structure through her time as a student at Spelman College and Howard University and through her social work in Washing D.C., New York, and South Carolina. In 1962, she joined the Congress of Racial Equality in New York and worked on Shirley Chisholm’s which made her more involved in civil rights organizing. After that, she worked on Shirley Chisholm’s 1968 campaign for the U.S. House of Representatives. When she moved back to South Carolina in the 1970s, Hammock served as the Executive Director of the state’s National Association of Social Workers. Hammock worked for 15 years as the Chief of Social Work for the Department of Corrections. Marjorie Hammock is one of the founding members of the Anita Hill Party.