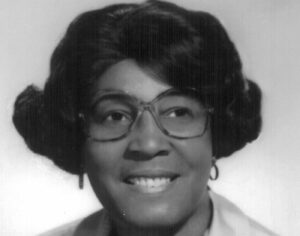 Marjorie Amos Frazier worked as the financial secretary for the NAACP’s Charleston branch, which tried to get public spaces within the city desegregated. From 1971 until 1975 she served as vice chairwoman of Charleston Democratic Party then was elected to the Judicial Council of the Democratic National Committee. She was the first woman elected to the Charleston City Council in 1974, serving for six years. Amos Frazier was elected by the General Assembly to the Public Service Commission and in 1990 became the first African American, the first woman, and first non-legislator to be the commissioner and to chair the group. She served this position for 13 years. She was honored for her achievements by the Alliance of Concerned Citizens for Better Government, named Woman of the Year by the state branch of the NAACP, in addition to a portion of Interstate 26 being named for her.