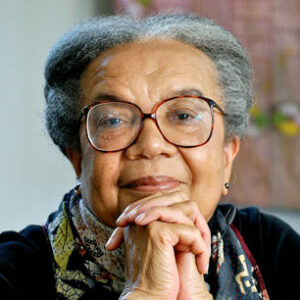 Marian Wright Edelman has advocated for disadvantaged Americans and founded the Children’s Defense Fund during her professional life. This fund has become the strongest voice for children and families giving every child an opportunity to be successful in life. As a graduate of Spelman College and Yale Law School, Edelman was the first African American woman admitted to the Mississippi Bar. She directed the Legal Defense and Educational Fund office for the NAACP in Jackson, Mississippi. Also, she has been the recipient of many awards such as: The Albert Schweitzer Humanitarian Prize, the Heinz Award, and a MacArthur Foundation Prize Fellowship. She received the Presidential Medal of Freedom in 2000 and the Robert F Kennedy Lifetime Achievement Award for her writings.