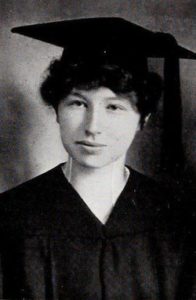 (1894-1954)
Kate Vixon Wofford was born on October 20, 1894, in Laurens, the eldest of ten children. She received an A.B. with honors in 1916 from Winthrop College and soon after started teaching at Laurens High School. She served briefly in the Washington office of U.S. Senator Ben Tillman and then joined the navy as a yeoman during World War I. Wofford returned to teach at Laurens High and in 1922 was elected to the first of two terms as county superintendent of schools, the first female school superintendent in South Carolina and the first woman elected to public office in the state. The support of women, with their newly granted suffrage rights, was important to Wofford’s election success.
Information courtesy of the South Carolina Encyclopedia.
Back to Groundbreakers