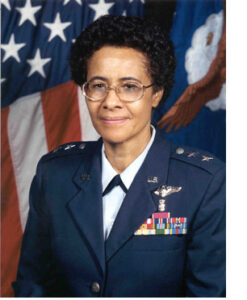 After growing up picking cotton with her family, Irene Trowell-Harris found a different calling for herself and became a nurse at her community college. Her church gathered money to send her to Columbia College of Nursing. She became a first lieutenant in the New York Air National Guard in 1963 then joined the Aerospace School of Medicine as a flight nurse. Irene received a masters from Yale University in 1973, then a doctorate in Education at Columbia University in 1983. In 1986 she was given command of the 105th USAF clinic which made history as a nurse had never been given total charge of a clinic before. In 1993 she was promoted and became the first African American woman to reach the rank of Major General in the US National Guard. She also served as Director of the Department of Veterans Affairs Center for Women Veterans to solve issues related to female veterans.