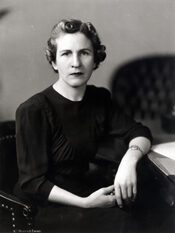 The wife of S.C. congressman Thomas S. McMillan was elected to Congress to serve the remainder of her deceased husband’s term, 1939-1940. Clara Eloise Gooding completed a teacher training course at the Confederate Home College in Charleston in 1915 and taught school in Crocketville in Hampton County for one year before marrying. McMillan was the second woman from South Carolina to be elected to Congress and the first to actually participate in a Congressional session.

McMillan sponsored a bill to reimburse the Beaufort County Public Library for books destroyed by Union occupiers during the Civil War and was known for her support of military appropriations and the Selective Service. She did not run for re-election in 1940, but stayed in Washington and served in the National Youth Administration and, later, the Office of Government Reports and Office of War Information. In 1946, she was appointed a Congressional Liaison Officer for the Department of State. She served in that capacity until 1957 or 1958. McMillan was selected South Carolina’s Mother of the Year in 1960.