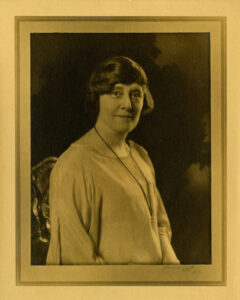 Carrie Pollitzer was born in Charleston, South Carolina in 1881. Carrie worked hard and graduated from Memminger Normal School and studied at Columbia Teacher’s College in New York City in 1901. Carrie believed many of our society’s issues were solved by education, it became her focus to help education become more accessible to people in South Carolina. In 1908 she launched Charleston’s first free kindergarten and shortly after Carrie was appointed Assistant Principal of South Carolina Kindergarten Training School where she worked on many initiatives such as social work for children, teacher visits to students’ homes, and parent-teacher organizations. She became secretary and chair of the Charleston Equal Suffrage League and an Executive Board member of the Charleston Federation of Women’s Clubs. She and other members petitioned the College of Charleston to admit women, which they did the following year.