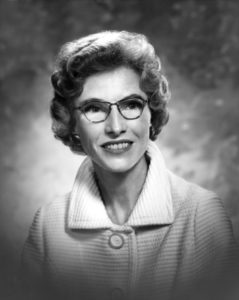 Carolyn Essig Frederick represented Greenville County in the South Carolina House for ten years from 1967 to 1976. A Republican pioneer who campaigned with the slogan, “Carolyn cares,’ she was the first Republican woman to be elected to the House. She was instrumental in passage of the Freedom of Information Act and author of legislation establishing Foster Care Review Boards, the Tuition Grants Program, and the South Carolina Commission on Women. She was born in Atlanta, Ga., to Philip M. and Lillian Essig and received her A.B. degree from Agnes Scott College in 1928. A newspaperwoman and advertising executive, her public service began in 1950 when she became Assistant Director of the Greenville Community Chest and Council, 1950-1953. From 1958 to 1964, she served as Public Relations Director of the YWCA. Frederick had a long association with the Greenville Symphony Orchestra and was named South Carolina Woman of the Year in 1970. She received the Order of the Palmetto in 1995.