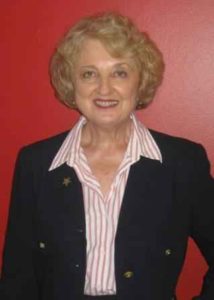 Candy Yaghjian Waites represented S.C. House District 75 from 1988 until 1994. Waites received her B.A. from Wheaton College in 1965 and a Masters in Public Administration from the University of South Carolina in 1997. Waites made national news during the 1964 presidential election when her Wheaton classmates raised money to fly Waites home to vote. As a result of the publicity, South Carolina amended its absentee ballot law the following year.

Waites told one reporter, “The important thing here is that I’ve been waiting many years to vote – and suddenly I’m 21 and discover I can’t vote because I’m away at school…When a girl reaches 21, fine clothes, exotic foods, perfume and interesting dates are fine and dandy, but she also wants her right to vote.”

From 1973 to 1976, Waites served as the president of the League of Women Voters of the Columbia area. In 1976, she ran as a Democrat and became the first woman elected to Richland County Council. Re-elected in 1980 and 1984, she served on the Council for twelve years. In June 1988, Waites was elected to the SC House of Representatives in a special election. She was re-elected to a full term in November 1989. During her time in the House, she served on the Agriculture and Natural Resources Committee, the Nuclear Waste Consultation Committee, and the Local Government Study Committee. She co-chaired the Freshmen Caucus and was secretary of the Democratic Caucus. In 1994, she decided not to pursue re-election due to district reapportionment.