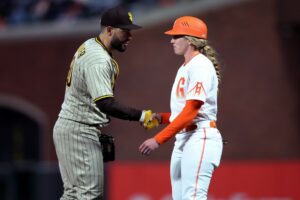 The call to take her place in baseball history, one that Alyssa Nakken had long prepared for, came in the third inning Tuesday night, when the San Francisco Giants’ first base coach was ejected for responding to what he said was a racist remark.

Nakken, an assistant who works with Giants players on baserunning and outfield defense, became the first woman in MLB history to coach on the field after the ejection of Antoan Richardson. When called upon, she left her spot in the batting cage, replaced her sweatshirt with her No. 92 jersey and grabbed a batting helmet.

“I think we’re all inspirations doing everything that we do on a day-to-day basis and I think, yes, this carries a little bit more weight because of the visibility, obviously there’s a historical nature to it,” she said (via the Associated Press) after the Giants’ 13-2 victory over the San Diego Padres. “But again, this is my job.”

Her helmet is on its way to the Hall of Fame in Cooperstown, N.Y., not that Nakken needed a reminder of the significance of her appearance, which came days after Rachel Balkovec became the first woman to manage a major league team’s minor league affiliate.

“It’s a big deal,” Nakken said of her moment. “I feel a great sense of responsibility and I feel it’s my job to honor those who have helped me to where I am.”