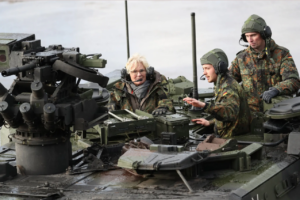 It was Chancellor Olaf Scholz who, three days after Russia’s invasion of Ukraine, broke with Germany’s postwar pacifism, vowing to give his country the necessary resources and muscle to lead on security matters in Europe.

Those now tasked with carrying out that change — the biggest foreign-policy shift in Germany since World War II — are women.

Defense Minister Christine Lambrecht, who is in Washington this week, is overseeing a rearmament program of 100 billion euros, about $110 billion, for the German military. Annalena Baerbock, the foreign minister, is devising Germany’s first national security strategy. And Nancy Faeser, in charge of homeland security, is organizing the welcome for hundreds of thousands of Ukrainian refugees.

As war rages in Ukraine, a mere 10-hour drive from Berlin, it is the first time that Germany has all three national security positions filled by women, putting them on the frontline of both a cultural and a strategic revolution in their country.