From Rhetoric to Reality: Advancing Women’s Participation in Peace Processes 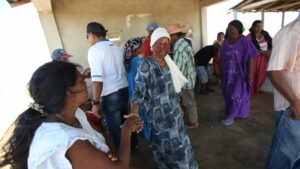 As President-elect Biden prepares to tackle global challenges, there is a concrete way to increase the odds of success: involve more women in high-level decision-making. This applies not only to the next President’s team but also to the conflicts they will seek to resolve. From Colombia to Ireland, the record is clear that women’s inclusion in peace processes increases the odds of reaching a deal that lasts. Yet for all the evidence underlining the importance of women’s inclusion, recent years have seen a decrease in the number of women at the negotiating table.

According to the UN Secretary-General, women’s direct participation within track I peace processes has become “increasingly difficult” to achieve. In the last several years, the number of delegations of parties to conflicts in United Nations-led and co-led peace processes that included women actually declined. From peace talks on Yemen and Afghanistan to the Central African Republic and Sudan, securing a place for women within delegations has been deemed too controversial at worst, or too complicated at best, given the tremendous difficulties diplomats face in bringing even the men to the negotiating table. And so, a number of new initiatives have settled for appointing women to roles just short of negotiator status: female advisors, consultant bodies, track II participants, etc. These initiatives are important to keep women involved within peace processes, but they cannot replace having women at the table. The next U.S. administration should not accept them as such.

At Independent Diplomat—a nonprofit diplomatic advisory group that works to secure more inclusive peace—I have had the privilege of working with and learning from many of the women who are at the table in conflict zones. In Syria, Libya, Western Sahara, Mali, Venezuela, and Yemen, we have supported women who have a seat at the negotiating table, and pushed to create seats for women who do not. We have worked with female politicians and civil society leaders across a wide range of conflicts, enabling them to directly address international decisionmakers, hone and implement political strategies, and put forward constructive policy proposals that shape the decisions reached at the negotiating table. Over the years, I have seen that despite their differences across regions and positions, many women confront similar obstacles as they push for women’s inclusion in peace processes while advancing the policies that matter to their constituents. These are some of the lessons I have learned along the way.

This post is part of the Council on Foreign Relations’ blog series on women’s leadership in peacebuilding and non-violent movements, in which CFR fellows, scholars, and practitioners highlight new security strategies. This post was authored by Dr. Marlene Spoerri, Independent Diplomat’s Director of Inclusive Diplomacy and Systems Change.