For Women in Economics, the Hostility Is Out in the Open 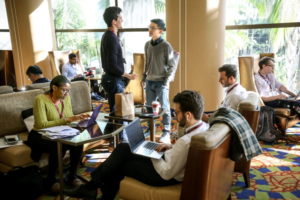 A few years ago, the economists Alicia Sasser Modestino and Justin Wolfers sat at the back of a professional conference and watched Rebecca Diamond, a rising star in their field, present her latest research on inequality. Or at least she was meant to present it — moments after she began her talk, the audience began peppering her with questions.

“She must have gotten 15 questions in the first five minutes, including, ‘Are you going to show us the data?’” Dr. Modestino recalled. It was an odd, even demeaning question — the session was in the data-heavy field of applied microeconomics. Of course she was going to show her data.

Later that morning, Dr. Modestino and Dr. Wolfers watched as another prominent economist, Arindrajit Dube, presented a paper on the minimum wage. But while that was one of the most hotly debated topics in the field, the audience allowed Dr. Dube to lay out his findings for several minutes with few interruptions.

Over a drink later, Dr. Modestino and Dr. Wolfers wondered: Had the audiences treated the two presenters differently because of their genders?

They couldn’t be sure. Maybe the audience treated Dr. Dube differently because he was more senior. Maybe they had simply found his paper more convincing, or less interesting. Maybe the observations of Dr. Modestino and Dr. Wolfers were a result of their own biases — Dr. Dube, in an email, recalled getting lots of questions, some of them quite skeptical. (He added that he didn’t know how his reception compared with Dr. Diamond’s, and he said didn’t challenge Dr. Modestino’s recollection over all.)

So Dr. Modestino and Dr. Wolfers, who has written on economics in The New York Times, did what economists often do: They gathered data. Along with two other economists, Pascaline Dupas and Muriel Niederle, they recruited dozens of graduate students across the country to attend hundreds of economics presentations to record what happened. Their findings, according to a working paper that is expected to be published next week by the National Bureau of Economic Research: Women received 12 percent more questions than men, and they were more likely to get questions that were patronizing or hostile.

“It measures something that we thought couldn’t be measured,” Dr. Modestino said. “It links it to a potential reason that women are underrepresented in the profession.”

(Another sign of trouble in the profession: Dr. Modestino and her colleagues listed their graduate student contributors as co-authors on their paper, but many declined to have their names published out of fear of retaliation.)

The paper is the latest addition to a mounting body of evidence of gender discrimination in economics. Other researchers in recent years have found that women are less likely than men to be hired and promoted, and face greater barriers to getting their work published in economic journals. Those problems aren’t unique to economics, but there is evidence that the field has a particular problem: Gender and racial gaps in economics are wider, and have narrowed less over time, than in many other fields.