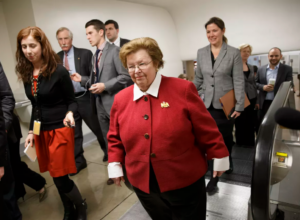 Sen. Amy Klobuchar noticed right away as the male senators glanced around, wondering how their bipartisan prayer breakfast meeting room had all these pictures of women, powerful women.

Where, they wondered, did all this come from?

“Well, this is the Barbara Mikulski room now,” the Democrat from Minnesota told them.

For the first time in more than 230 years of Senate history, two rooms were formally named last week in honor of women: Mikulski, a Democrat from Maryland, and who retired at the end of 2016 as the longest-serving female senator, and the late Margaret Chase Smith, Republican from Maine – and the first woman to win election to the House and the Senate, and who stood up to McCarthyism in the 1950s.

Klobuchar, who oversaw the effort as chair of the Senate Rules Committee, recognizes that naming a couple of rooms on the U.S. Capitol’s first floor is not exactly a major break-the-glass-ceiling moment for women’s rights. But, along with a few other initiatives, it’s a symbolic effort meant to demonstrate that women’s places are in the House and the Senate, as well as the vice presidency, the Supreme Court and, one day, the White House.

“There are little girls walking around these places all the time,” Klobuchar, D-Minnesota, said in an interview inside the Chase Smith Room, which she has turned into a small museum of women’s advancement in the Capitol. “And if all they see are guys, this isn’t their home.”