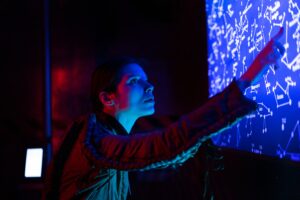 In her new role, Ridings will serve as the deputy program manager, where she will lead teams to build and launch NASA’s foundational infrastructure in deep space.

“I am honored to help lead the Gateway Program—a blueprint for NASA’s exploration plans to the Moon and beyond,” Ridings said. “Serving as chief flight director has been a great honor, and I will carry the excellence of Flight Operations with me to the incredible Gateway team.”

“The Gateway Program will be served incredibly well by Holly’s tremendous depth of experience supporting the International Space Station,” said Dan Hartman, Gateway Program manager. “Through Gateway, NASA is extending more than 20 years of discovery, research and international collaboration in low-Earth orbit to deep space, starting at the Moon.”