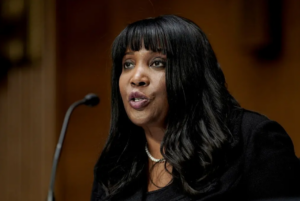 The Senate confirmed Lisa D. Cook as a Federal Reserve governor on Tuesday, making her the first Black woman to hold that influential policy post.

Her confirmation came after Vice President Kamala Harris broke a 50-to-50 tie in the Senate, moving the Biden administration one step closer to reshaping the leadership team at the central bank.

Ms. Cook, an economist at Michigan State University who has researched racial disparities and labor markets, was nominated alongside a slate of other officials — President Biden had a chance to fill two open governor positions and to pick a new chair, vice chair and vice chair for supervision at the central bank.

Lael Brainard, Mr. Biden’s pick for Fed vice chair, is the only one of his Fed nominees who had already been confirmed.

Mr. Biden has also nominated Philip N. Jefferson, an academic economist and administrator at Davidson College, and he has renominated Jerome H. Powell as Fed chair. His initial nominee for the Fed vice chair for supervision, Sarah Bloom Raskin, withdrew from consideration amid Republican and some Democratic opposition. Michael S. Barr was put up for the job more recently, and he still awaits a confirmation hearing.

If those additional nominees are confirmed, Mr. Biden will have nominated or renominated five of the Fed’s seven governors. The Fed is independent of politics, so those appointments are the main way that the White House can shape the future of monetary policy, which is used to keep inflation stable and employment high.