Explore our series by John Ruoff on redistricting:

Redistricting is the process of drawing boundaries for electoral and political districts in the U.S. and is usually done every ten years after the census. The next U.S. census will take place in 2020 and all states must adjust their voting districts to align with changes in population. The U.S. Constitution requires each Representative in Congress represent an equal number of citizens and mandates a census to determine the number of citizens and apportion seats to each state. 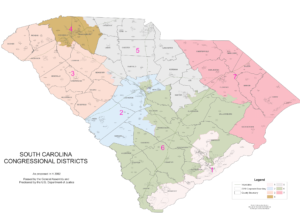 APPORTIONMENT REQUIRED BY THE CONSTITUTION AND CONDUCTED BY THE CENSUS BUREAU

Each state maintains standards for creating electoral districts. Beyond equalizing the population of districts and complying with other federal requirements, criteria may include creating compact, contiguous districts; keeping political units and communities within a single district; and avoiding the drawing of boundaries for purposes of partisan advantage or incumbent protection.

South Carolinians fact critical decisions before the task of redistricting can be undertaken.

The League of Women Voters has discussed the issue of who draws legislative district boundaries during the redistricting process. Do voters choose their representatives, or do representatives choose their voters? The criteria for drawing boundaries may be an even more important issue than who draws those boundaries in answering this question in favor of voters. The League recommends an independent or bipartisan commission.

Court cases over the years have established more specific guidelines for how these universal requirements are implemented. Within those boundaries, each house of the SC General Assembly has created its own specific criteria.  In 2011 the South Carolina Senate issued its criteria and the House also issued criteria. The House criteria of 2011, interestingly, include “Incumbent Protection” as a specific requirement. The House and the Senate do not need to adopt the same criteria.