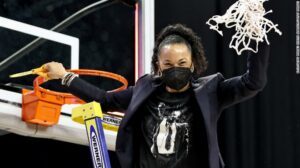 At the top of Dawn Staley’s stacked trophy case is an orange and white basketball. The University of South Carolina women’s basketball head coach said the ball was signed by every Olympic coach, and she finally added her own signature last month. It also serves as a reminder of just how much the game has given her.

Staley was gifted the ball when she was coaching at Temple University, before she coached USA Basketball. In fact, when Staley began transitioning from a player to a coach, she thought all she wanted to do was win. She soon discovered basketball still had so much left for her.

“There are other aspirations that come out of it, like if I want to be a coach, I want to be the best,” Staley told CNN Sport. “This game is filled with so many aspirations, so competitive. So like dreams and realities are at your fingertips and you just have to figure out how to navigate through it.”

Staley is also a two-time NCAA player of the year (1991, 1992) and a six-time WNBA All-Star. After winning the honor in 2020, Staley once again won the Naismith Coach of the Year Award, beating out LSU’s Kim Mulkey, Stanford’s Tara VanDerveer and North Carolina State’s Wes Moore.