Column: Women in leadership need to hold the door for each other 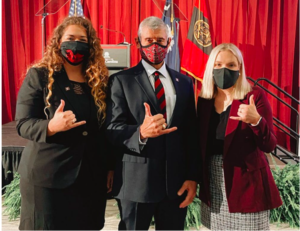 For women, walking into a room is not always easy. As we carry their personal stories with us, it is our responsibility to pass their teachings on to increase female leadership roles.

When I was in 4th grade, I went into my father’s room and said I was not good enough for math.

“Do not ever say that you are not good enough for something,” he replied.

Being a woman in a leadership role at USC sometimes means being the only woman in the room.

Issy Rushton, the first international student and first woman to serve as student body president at USC in six years, said she ran because she wanted to make sure students, especially Black and minority women, could be more represented in all rooms.

However, it was hard to be the first female president in six years because in terms of advice, she only had six years of men behind her, she said.

“There is something different about being able to talk to female leaders and see their perspective on the world and what they are passionate about,” Rushton said.

Nevertheless, Rushton said she appreciates the mentorship opportunities USC has provided her in her role.

“I had a lot of role models, even from my freshmen year who were seniors, who kind of took me under their wing and showed me the way and showed me how to be a good leader at this university,” Rushton said.

Head women’s soccer coach Shelley Smith said a notable change in the last four years is having another woman on staff, Marnie Merritt, as an assistant coach.

“Our department’s done a good job to put women in positions of leadership,” Smith said. “Women can do a job just as well, and that’s been a nice growth for all women across the board.”

There are more women in coaching who have made an effort to help each other, give support and give feedback, Smith said.

Smith, who coaches with her husband, Jamie, said there are challenges when you are a woman in a leadership position.

“What you need to say, how you need to lead, I think that is a challenge, really, in any job, and, really, any gender has to figure that out,” Smith said. “We all might be fighting battles that maybe men don’t face sometimes.”

A lot of female athletes weren’t used to having a female coach, as they’ve only experienced men coaching them, Smith said.

“The more that you see trying, the more it will be accepted,” Smith said.