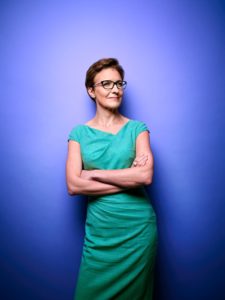 Booms and busts and scams and panics have changed Wall Street in many ways over the decades, but one thing has stubbornly remained the same: The top jobs have always gone to men. Now, that last citadel is about to fall.

Come February, Jane Fraser will become the first woman to lead a major financial institution in the United States when she takes the reins at Citigroup, the country’s third-largest bank. Ms. Fraser, who has been at Citi for 16 years and runs its biggest global division, the consumer bank catering to individual customers, will succeed Michael Corbat as chief executive.

“It’s about time,” said Heidi Miller, a former top executive at JPMorgan Chase who was once seen as a potential successor to Jamie Dimon, the bank’s longtime chief executive. “Kudos to Citi for recognizing the talent and giving her the opportunity and letting her grow,” Ms. Miller said, adding that she was “ecstatic.”

Ms. Fraser’s ascension is groundbreaking on Wall Street, which has never quite shaken off its longstanding reputation as a boys club, with men dominating the upper ranks of banks and other financial firms, despite efforts to recruit and promote more women. At a hearing of the House Financial Services Committee in April 2019, one lawmaker asked Mr. Corbat and six of his peers — from JPMorgan Chase, Bank of America, Goldman Sachs, Morgan Stanley, Bank of New York Mellon and State Street — to raise their hand if they believed a woman or person of color would succeed them. None did.

Not only will Ms. Fraser, 53, not have any female counterparts among the 10 largest U.S. banks when she become Citi’s chief, she will also join a very small group of female leaders at major American corporations. There are only 31 women among the chief executives of the 500 companies that make up the S&P 500 stock index, according to the advocacy group Catalyst.

Women accounted for 26 percent of all senior U.S. financial services executives in 2019, an increase of 6 percentage points from 2016, according to a November report by the consulting firm Oliver Wyman. Despite this progress, the industry is still struggling to be inclusive and thoughtful about accommodating women’s careers as they rise up the ranks, especially when they have to juggle job and family.

Just last year, at a World Economic Forum event in Davos, Switzerland, called “The Female Quotient,” Mr. Dimon said that he had learned that women were willing to travel for work. “Men shouldn’t assume that a woman doesn’t want to travel,” he said. “We should ask them.”

Still, today’s Wall Street is a different place than when Ms. Fraser — a Scot who started working at Goldman in London at the age of 20 before attending Harvard Business School — entered it. It was the 1990s, and women were beginning to make strides on Wall Street — their ambitions, their challenges and their boxy suits fictionalized memorably in Hollywood movies of the previous decade like “Working Girl” and “Baby Boom.”

But as Ms. Fraser contemplated returning to Goldman after Harvard, she noticed that the women who had succeeded there — and in investment banking generally — looked “rather scary” and had to dress “almost like a man,” she recalled in a 2016 speech at a financial industry conference in Miami. “None of them were that happy,” she said.

Instead, Ms. Fraser sought a more measured routine that would allow her to start a family while pursuing a career. She joined the consulting firm McKinsey & Company, but it was always a balancing act. In her speech in Miami, Ms. Fraser recalled receiving a phone call from her boss telling her she had made partner two weeks after she’d had a child, and rushing through the conversation thinking, “I have to feed the baby.”

“I’m a working mother,” Ms. Fraser joked in Miami. “I have three boys at home, I have a 14-year-old, a 16-year-old and a 59-year-old, and the oldest one, my husband, says he feels the same way.” Her husband, Alberto Piedra, ran Bank of America’s operations in Europe after spending 15 years at Goldman Sachs. He retired in 2009 as the head of global banking at Dresdner Kleinwort.

Ms. Fraser, who is the president of Citi, has run several businesses in her 16-year career at the bank, including overseeing its Latin American region. In a 2014 speech, she described her appointment as the global head of Citi’s mortgage business as a “turnaround” task. Her success there paved the way for her promotion to bank president last year, an appointment that teed her up as the bank’s next chief executive.

“We believe Jane is the right person to build on Mike’s record and take Citi to the next level,” John C. Dugan, Citi’s chairman, said in a statement. “She has deep experience across our lines of business and regions, and we are highly confident in her.”

In a note to employees, Ms. Fraser said that Citi had “a remarkable set of assets, starting with our people and a global network no one can match,” and it needed to “build on that foundation and position the bank for the digital and disruptive times ahead, and for consistent, sustainable performance and long term success.”

Word of Ms. Fraser’s coming promotion — to a position where she will oversee a bank that is the world’s biggest issuer of credit cards and has $1.96 trillion in assets — drew kudos from other powerful women on Wall Street.

“I always hoped that by the time I retired that there would be other women in C.E.O. roles,” said Beth Mooney, the former chief executive of KeyCorp, one of the 20 largest U.S. banks, who stepped down in April. “What an incredibly proud day this is,” Ms. Mooney said.