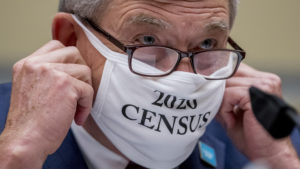 The Census Bureau is cutting short critical door-knocking efforts for the 2020 census amid growing concerns among Democrats in Congress that the White House is pressuring the bureau to wrap up counting soon for political gain, NPR has learned.

Attempts by the bureau’s workers to conduct in-person interviews for the census will end on Sept. 30 — not Oct. 31, the end date it indicated in April would be necessary to count every person living in the U.S. given major setbacks from the coronavirus pandemic. Three Census Bureau employees, who were informed of the plans during separate internal meetings Thursday, confirmed the new end date with NPR. All of the employees spoke on the condition of anonymity out of fear of losing their jobs.

“It’s going to be impossible to complete the count in time,” said one of the bureau employees, an area manager who oversees local census offices. “I’m very fearful we’re going to have a massive undercount.”

Asked why and when the decision was made to move up the end of door knocking, the Census Bureau replied in a written statement Friday: “We are currently evaluating our operations to enable the Census Bureau to provide this data in the most expeditious manner and when those plans have been finalized we will make an announcement.”

About 4 out of 10 households nationwide have still not participated in the constitutionally mandated count of every person living in the U.S., and self-response rates are even lower in many communities.

This month, the bureau began deploying door knockers to visit unresponsive homes in certain parts of the country. Door-knocking efforts are expected to roll out nationwide Aug. 11.

It’s unclear how much longer households can submit census responses on their own by going online, over the phone and by mail. The bureau’s website — which as recently as Thursday still listed Oct. 31 as the end of the “self-response phase” that began in March — now reads that phase will last until the end of field data collection.

The condensed door-knocking time frame increases the risk of leaving out many people of color, immigrants and other members of historically undercounted groups from numbers that are collected once a decade to determine each state’s share of congressional seats, Electoral College votes and an estimated $1.5 trillion a year in federal tax dollars for Medicare, Medicaid and other public services.