Bridget Brink Tapped to Be New U.S. Ambassador to Ukraine 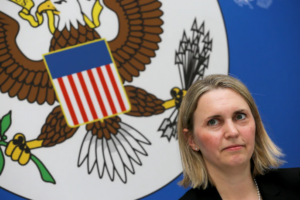 President Biden plans to nominate Bridget Brink to serve as the next U.S. ambassador to Ukraine, the White House announced Monday. The move is intended to fill a position that has remained officially vacant for three years — and is now even more crucial during the Russian invasion.

Secretary of State Antony Blinken said on the heels of a visit to Kyiv that Brink, who is currently the U.S. ambassador to Slovakia, is “deeply experienced in the region” and “will be a very strong representative for the United States in Ukraine.”

The officials said U.S. diplomatic operations would resume this week in Ukraine, in a first step toward reopening the U.S. Embassy in Kyiv. Brink’s “decades of experience make her uniquely suited for this moment in Ukraine’s history,” the State Department said in a statement Monday.

Ukraine has not had a U.S. ambassador since 2019. Brink’s nomination is intended to fill a diplomatic void that has remained since President Donald Trump unceremoniously removed Marie Yovanovitch from the position in 2019 — a move that was scrutinized during Trump’s first impeachment inquiry.

Brink, whose Foreign Service career spans more than 26 years, is no stranger to escalating tensions in Eastern Europe.