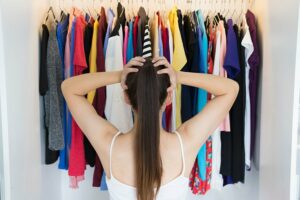 Forty-three women elected to the State House of Representatives in Missouri now have to wear a jacket to work. The new dress code for female lawmakers is prompting pushback to a move some call out of touch, out of date and outright sexist.

CNN reports that this is not unprecedented. “In the US Congress, up until 2017, reporters and lawmakers were required to wear dresses and blouses with sleeves if they wanted to enter the House chamber. A group of bipartisan female lawmakers protested over their ‘right to bare arms,’ prompting then-Speaker Paul Ryan’s office to concede that the dress code ‘could stand to be a bit modernized.’ The US Senate later amended its rules as well, The New York Times reported.”

A similar wave of resistance is flowing in charter schools across the country, with a case in the Supreme Court challenging a North Carolina school’s mandate that its female students wear dresses or skirts.

This dress code in particular gives me flashbacks to 1968 when as a 10-year-old fourth grade student at a suburban Chicago Catholic school, I was made to stand face-first in the corner of the classroom all day on a non-uniform last day of school because I wore culottes. My mother withdrew my brother and me from that school that week and enrolled us in a public school up the street for the fall. There was no uniform or dress code there.

This rigidity seems at odds with a post-pandemic, half-in, half-out remote workplace culture where the yoga pants and leggings of the past three years were acceptable on Zoom calls where it seems no one wore shoes.

Yes, it is important to appear professional and put-together for work now and always, but such specifics as a jacket or cardigan covering your shoulders seems to bear a gender bias.

Still many report that as a business leader, entrepreneur, team member and colleague, how you dress for work, presentations, keynotes, meetings, business lunches, conferences, dinners and more continues to be up for discussion. And it is not so simple.

Allison Shapira, founder and CEO of Global Public Speaking, and author of, Speak with Impact: How to Command the Room and Influence Others, writes recently in Harvard Business Review, “Authenticity sends a powerful message, and what we are seeing post-pandemic is that comfort does as well. Business executives can set the tone…by demonstrating to others how the office dress code is changing.”

Shapira adds, “Lest you fear that dressing down might make you appear less successful to your peers or clients, fascinating research conducted by Silvia Bellezza, Francesca Gino, and Anat Keinan points in the opposite direction. In “The Red Sneakers Effect: Inferring Status and Competence from Signals of Nonconformity,” they found that, “Nonconforming behaviors, as costly and visible signals, can act as a particular form of conspicuous consumption and lead to positive inferences of status and competence in the eyes of others.”

Dress codes are not new, but they have been influenced by the realities of millions working from home and not having to worry so much about what is formal over what is comfortable.

Richard Thompson Ford, a law professor at Stanford University, writes in the 2021 book, Dress Codes: How the Laws of Fashion Made History, that what people wear matters, from work to play, from royalty to sainthood and everyone in between.

“Medieval and Renaissance-era sumptuary laws assigned clothing according to social rank” and “the laws of American slave states prohibited black people from dressing ‘above their condition,” he writes. According to Bookpage, “What someone wore could be a life-or-death decision, he notes, pointing to Joan of Arc as an example. She was found guilty of heresy for wearing traditionally masculine attire in battle and was burned at the stake, making her ‘one of history’s first fashion victims’ circa 1431.”

Some workplaces have loosened up about attire for men and women, according to Fast Company: “But the pandemic has prompted even the most formal industries to ditch their rules of attire. After two years of working from home in sweatpants and leggings, law, consulting, and finance firms are now letting employees wear what they want as their offices re-open.”

In some professions, such as law, dress codes are loosening for women and men, but still hold employees accountable, particularly new hires.

Hogan Lovells U.S. hiring partner Carin Carithers tells Reuters, “Since our transition to hybrid working, many of our people have been wearing attire that falls into the category of business casual, though we do have some offices where jeans are commonplace. Of course, when our lawyers are headed to court or other client facing functions, we continue to dress in business-appropriate attire.”

While there is a constantly evolving sliding scale on rules of what is and is not appropriate to wear to work, as recent as April 2022, Stephanie Coughlan, Founder of Image Intelligence, writes in Forbes about the necessity to wear leather shoes. Which would be problematic for those opposed to wearing animal leather.

Coughlan, a member of the Forbes Business Council, also writes that items required for a workplace that is “moderate formal, or smart, relaxed” include “a white T-shirt that is not wrinkled; sweater set or blazer; collared shirt with sleeves; turtleneck; trousers; slacks and pants that have shape and structure (pressed with no holes)” and more subjective, and possibly problematic suggestions.

So common sense needs to be in the dress code equation, even as these extremely specific details seem too much.

Elected representatives in the U.S. who identify as women are dealing with new rules and expectations, just as schools, institutions and organizations are dealing with adjustments to post-pandemic workplace cultures.

In an interview with The Globe and Mail, Sumana Jeddy, founder and CEO of The Workplace Wellness Collective and Jeddy Wellness, says, “It’s not so much about instituting a specific dress code as it is about providing direction on work settings. Can you create some guidelines on attire for client meetings vs. individual deep work vs. scrum vs. in-office internal meetings vs. Zoom meetings?”

Jeddy adds, “Whether you are selecting a business formal, business professional, business casual, smart elegant, smart relaxed or smart sporty dress code, examine your personal bias to ensure you are implementing a non-biased, gender-neutral, dress code policy for your employees. That will ensure you are providing a more diverse, equitable and inclusive workplace.”

Originally published by Michele Weldon for Take The Lead

Michele Weldon is editorial director of Take The Lead, an award-winning author, journalist, emerita faculty in journalism at Northwestern University and a senior leader with The OpEd Project. @micheleweldon www.micheleweldon.com