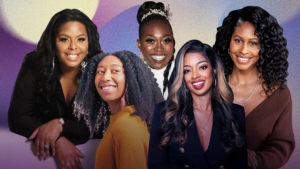 Though women made up approximately 49.6% of the global population in 2020, when one looks at the number of chief executives for the world’s biggest companies who also happen to be women, that number is just 8.1%. And last year, the number of Black women in that cohort was just two. So progress is happening, but it’s occurring at an extremely slow pace.

But luckily, there are thousands of companies in the world, so looking at the chief executive landscape is just a small microcosm of how many Black women are making waves in leadership around the globe. In the U.S. specifically, before the setbacks caused by the pandemic, Black women were the fastest-growing demographic in entrepreneurship. And many have taken on the dual role of founder and CEO, which gives them an even more significant stake in their companies’ outcomes. So now that the economy is recovering, unemployment is at one of its lowest levels ever, and consumers are feeling confident making plans, these executives are once again able to start thinking about the long-term success of the brands they work for and continue to build back a lot of the gains that occurred in 2020 after a big mainstream push to support Black businesses.

This kind of stewardship is happening across industries, with Black women CEOs making poignant waves in the lifestyle space as the go-to trendsetters for what’s next for centuries. These powerhouses are disrupting the venture capital space and funding businesses led by Black and Brown women, wellness by utilizing ingredients people of color have cherished for millennia to help us prioritize our wellbeing, spirits as social care is also of extreme importance, and so much more.

Here, 5 Black women CEOs who are paving the way for the next generation of female leaders share their words of wisdom.