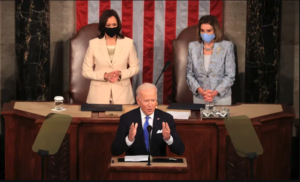 When Joe Biden gave his first speech to a joint session of Congress on Wednesday evening, viewers were treated to a historic first – the sight of two women, Kamala Harris and Nancy Pelosi, seated behind the president.

Biden began his speech by thanking “Madam speaker” and, in particular, “Madam vice-president”.

“No president has ever said those words, and it’s about time,” he said.

Harris, the first female, Black and south Asian vice-president, and Pelosi, the first female House speaker, took up their positions as Biden reflected on the first 99 days of his presidency and laid out his vision for the 1362 days to come.

Their presence demonstrated a measure of progress in the quest for gender equality in the US – even if Harris and Pelosi were flanking an aging white, male president – and Harris, in particular, proved a contrast to the past four years, which saw Donald Trump willed on by a bewitched Mike Pence.

When asked about the significance of two women sitting behind the president for the address, Harris told reporters it was “normal.”

Biden used the speech, which came on the eve of his 100th day in office on Thursday, to address the state of the Covid pandemic, and push the $2tn infrastructure plan he unveiled at the end of March.

Viewers saw Harris and Pelosi rise to their feet repeatedly during Biden’s address to applaud – something Pelosi largely avoided during Trump’s speeches to Congress.

Biden, as vice-president, spent eight years seated behind Barack Obama as the latter addressed joint sessions of Congress, with Harris assuming Biden’s former seat for the first time on Wednesday.

Pelosi has plenty of experience in these settings, having served as speaker of the House since 2019, and previously from 2007 to 2011.

In 2019 her parental-style clapping of Donald Trump during his State of the Union address became a viral moment, while a year later she was lauded by the left after she tore up a copy of Trump’s speech.

A president’s first address to Congress is usually an extravagant affair, witnessed by hundreds of guests, but the Covid pandemic means the audience was scaled back for Biden’s speech – from 1,600 guests to 200. Only one member of the supreme court – Chief Justice John Roberts – was invited, and members of Congress were told not to bring guests.