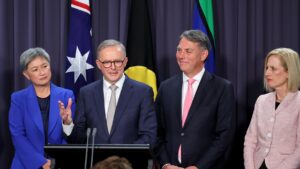 Australia’s new government will look more like its country, as Prime Minister Anthony Albanese has named a record 10 women to his incoming Cabinet. The high-profile appointments include Penny Wong as foreign minister, Claire O’Neil as home affairs and cyber security minister, and Katy Gallagher as finance minister.

“This is an exciting team. It’s a team that is overflowing, I think, with talent, with people who are absolutely committed to making a difference as ministers and assistant ministers,” Albanese said on Tuesday at a news conference in Canberra.

“This is the largest number of women who have ever served in an Australian Cabinet,” he added.

A few of the new leaders were sworn in last week, but Albanese has now unveiled the full slate of Cabinet postings. The remaining ministers will be sworn in Wednesday morning, he said.

With 10 women in leadership roles, Albanese is raising the bar set by seven women in top jobs under Scott Morrison, the former prime minister. But Morrison’s government also struggled to contend with a string of sexual misconduct scandals that helped pave the way for the conservatives’ ouster after nearly a decade in power.