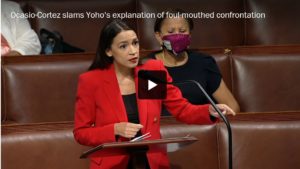 If you click on only one thing today, let it be Rep. Alexandria Ocasio-Cortez’s Thursday morning speech, delivered from the House floor and directed to a fellow member of Congress, but really to us all.

Two days prior, on the steps of the Capitol, Ocasio-Cortez found herself in a heated conversation with Rep. Ted Yoho (R-Fla.). He called her “disgusting,” he said she was “out of [her] freaking mind,” and when the discussion ended, Yoho allegedly uttered the words, “f—ing b—h.”

In her Thursday speech, Ocasio-Cortez said she’d planned to ignore the insult — that being a woman had required a lifetime of ignoring such insults — but changed her mind after Yoho himself brought up the matter in his own speech in the House. “Having been married for 45 years with two daughters, I’m very cognizant of language,” Yoho had said, insisting that he’d been misheard and hadn’t used the pejorative phrase that a reporter from The Hill heard him say. While Yoho apologized for the “misunderstanding,” he said, “I cannot apologize for my passion or for loving my God, my family and my country.”

It is not clear how or why loving one’s God and country would require a member of Congress to have a public meltdown on Capitol grounds, but it was the first part of Yoho’s fauxpology that bothered Ocasio-Cortez — the implication that Yoho could not or would not behave misogynistically because, after all, he had a wife and daughters.

“I am someone’s daughter, too,” she said. “Thankfully, my father is not alive to see how Mr. Yoho treated his daughter. My mother got to see Mr. Yoho’s disrespect of me on the floor of this House, on television. I am here because I have to show my parents that I am their daughter, and they did not raise me to accept abuse from men.”