All-women Ukrainian delegation travels to Washington with message from Kyiv 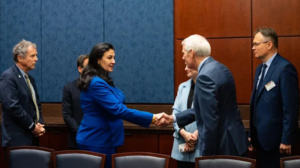 Five Ukrainian women, all members of parliament, left Kyiv this week for Washington — but only long enough to ask in person for more help before heading back into danger.

Driving the news: “We are mothers. We are MPs. We are volunteers. We are coordinators. And we are fighters,” Ukrainian MP Maria Ionova told a group of journalists on Wednesday after meetings with lawmakers and Pentagon and State Department officials. “We do not have time to be diplomatic and must be very direct with you.”

Why it matters: With most men ages 18-60 restricted from leaving the country due to military service requirements, Ukrainian women have played an outsized role in shuttle diplomacy over the course of the month-long war.

Details: The delegation’s in-person visit to Capitol Hill for meetings with the House Speaker Nancy Pelosi, the Congressional Ukraine Caucus and members of key committees served as an in-person twist on the powerful video appeals by President Volodymyr Zelensky.