Albright acted as model, mentor for generations of women 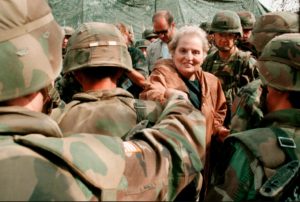 Dissatisfied with the temporary job she accepted after graduating from the University of Chicago, Sahana Dharmapuri felt the pressure to find work using her studies of the Middle East and public policy.

Scanning a newspaper on her lunch break, she found a full-page ad featuring a portion of a speech by then-Secretary of State Madeleine Albright on the effort to negotiate peace between Israel and Palestine. Dharmapuri tore the page out and took it with her when she moved to Washington, D.C., to hunt for a meaningful job.

It was the start of a career shaped by Albright’s example, from her history-making appointment as the first female secretary of state to the decades she spent mentoring, teaching, and speaking to women. Albright’s death from cancer this week sparked American women to reflect on the 84-year-old diplomat’s sweeping influence on their lives, 25 years after Bill Clinton made her the United States’ representative to the world.

“Not only did she break the ceiling, she brought people along with her, whether they were close to her or like me who saw her from a distance and said, ‘I can do that too,’” said Dharmapuri, director of Our Secure Future, a foundation that seeks to increase women’s participation in international affairs.