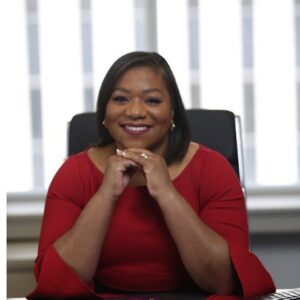 Tameika is a partner in the law firm of Jabber & Isaac, PA. She is also a former elected official and entrepreneur. Prior to founding her law firm, Tameika served as an Assistant Attorney General for the State of South Carolina.

First elected in 2002 at the age of 29, Tameika served as a member of city council for 20 years and served as the Mayor Pro Tem for 4 of those years. Tameika was the first African American woman to be elected to the city council. During her time as an elected city leader, she served on multiple boards and commissions to include the Board of Directors for the National League of Cities, the largest national organization of elected and appointed leaders of cities, towns and villages. Tameika is also the Founder of The Possibilities Institute, LLC, a peak performance public speaking and consulting firm specializing in working with women leaders and working moms and teaching them how to live their “Devine life”. In this capacity she has become a nationally known expert of women’s leadership and providing training to women at all levels of their careers.

Tameika currently serves on the boards of South Carolina Women In Leadership, Brookland Federal Credit Union, Turn 90 and South Carolina Communities In Schools. Tameika is a past board member of the National League of Cities, the Boards of Visitors for Columbia College and Women in Municipal Government. Tameika has been named one of the 50th Most Influential People in the Midlands by Columbia Business Monthly and a 2018 Woman of Influence by the Columbia Regional Business Report. She was selected by Governing Magazine to be one of their 20 leaders in the Women in Government Leadership Program. She is also the Author of 2 best-selling books, including “Think like A CEO, Act Like A Mom: The Pursuit of Work Life Integration”.

Tameika is married to Jamie L. Devine, an elected member of the Richland One Board of School Commissioners and their have 3 children.

Back to Board Members