‘A New Generation of Poll Workers’ Steps Up to Ensure Safe, Fair Elections 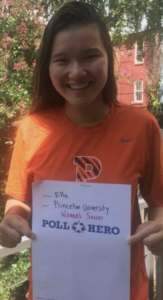 In less than 35 days, Ella Gantman will head to the polls for the first time—not only to vote, but also to be a poll worker. While Gantman has visited polling stations before with her family in their hometown of Washington, D.C., this time will be different.

“I’m expecting it to be really cool, in the fact that a lot of people are relying on you for help to cast their vote,” says Gantman, 19. “I’m really excited for those interpersonal connections and connecting with different voters.”

Gantman, a sophomore at Princeton University, says she’s always been passionate about democratic processes and civic engagement but hadn’t considered becoming a poll worker. That changed this summer when some of her fellow students met to brainstorm ways they could impact the election process.

The result was the Poll Hero Project, a nonpartisan group Gantman and other Princeton University students co-founded with students from Denver East High School and a graduate of University of Chicago Booth School of Business. The nonprofit group, with around 100 volunteers, is recruiting college and high school students to become poll workers. Their initial goal was 1,000 people; at last count over 28,000 had signed up.

As fears mount over if there will be a safe and fair election in November, various national efforts are underway to ensure election integrity and maximize voter turnout. One area of particular concern is the country’s potential shortage of poll workers to help with in-person voting. In response, new groups like the Poll Hero Project are mobilizing and existing ones getting creative to fill this gap.

Challenges with recruiting poll workers are not new. In 2018, around 70 percent of jurisdictions reported at least some difficulty in filling their poll worker jobs, according to a national survey by the U.S. Election Assistance Commission. But the COVID-19 crisis is making the problem much worse.

“What is new this year is a real significant need. We know that the majority of poll workers are over 60 years of age, and so likely in those higher-risk categories for complications of COVID,” says Ben Hovland, chairman of the U.S. Election Assistance Commission. “Coming out of the primaries, we saw real challenges that election administrators faced.”

In Georgia, for example, a shortage of poll workers resulted in huge lines and in Milwaukee only five polling stations out of the usual 180 were open.

In response, the Election Assistance Commission launched the first ever National Poll Worker Recruitment Day on September 1 and its Help America Vote website. Raising awareness is essential, says Hovland, as many people don’t realize they can become poll workers, that it’s a paid gig and that it’s nonpartisan.

“At a time when people are looking to make a difference or be able to do something, here is an absolute concrete way to help our democracy,” he says. “We know that people who serve as poll workers, particularly when it’s young people, they become more familiar and comfortable with the process and it leads to more long-term voting and engagement.”

The Poll Hero Project is using social media to reach young people, with a focus on cities especially at risk of poll worker shortages. Once someone signs up, one of the group’s volunteers guides them through the process. Gantman says they aren’t yet able to monitor how many people actually go on to become poll workers, but their engagement team is staying connected with those who sign up to encourage follow through. So far, the majority of those who’ve signed up are high school students. In many states people younger than 18 can be poll workers even if they can’t vote.

“It’s so compelling to have students recruiting other students. That has been a huge part of our success,” Gantman says. “There’s a unified Gen Z pride, a little bit, in being that generation that’s going to create change this election.”